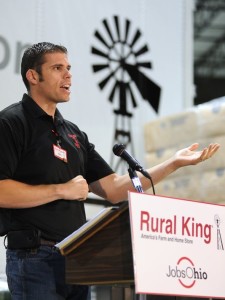 WAVERLY – Rural King, a retail chain specializing in farm and home goods, will open a new distribution center and store in Waverly in 2015, bringing up to 160 new jobs to Pike County.

Rural King CEO Alex Melvin announced the $12.5 million investment Monday in the 930,000-square-foot warehouse the company will occupy in Pike Industrial Park on Hopewell Road. A number of state and local officials including Gov. John Kasich and U.S. Rep. Brad Wenstrup, R-Cincinnati, joined Melvin for the ceremony, which took up a small section of the cavernous warehouse.

Formerly used by cabinetry manufacturer Mill’s Pride, the distribution center is expected to employ 120 people and serve 30 stores in the chain’s growing footprint of nearly 80 locations across 10 states. It’s slated to open in June.

Click here to apply for jobs at the Waverly distribution center and store.

The distribution center has the capacity to serve up to 80 stores, and with the company eyeing more growth toward the eastern U.S. there’s a potential for more jobs being added in the future.

“We’re in a real growth stage right now…Our company is growing quickly,” Melvin said, adding that his goal is to eventually maximize the warehouse space.

“We can touch a good portion of the United States from this location,” Melvin said. “Logistically, this makes a lot of sense for our company.”

Rural King added seven stores in 2012, nine in 2013 and eight this year. There are plans to add between eight and 10 stores in 2015. The company opened its first Ohio store in Wooster 10 years ago. The stores located closest to Waverly are in Circleville and Gallipolis.

The Waverly store, which is scheduled to open in March in an adjacent building on the property, will employ another 40 workers, Melvin said.

In Pike County, which has suffered bouts with job loss and state-high unemployment numbers in recent years, even good news can serve as a reminder of the bad economic times it has endured. That was not lost on Melvin or Kasich, and certainly not on Waverly Mayor Greg Kempton, who lost his job at Mill’s Pride.

“What a horrible loss for the facility that happened here over the last five years, but what a great opportunity for Rural King and also Waverly and the state of Ohio,” Melvin said. “We are very excited about coming to the area.”

Kasich pointed out there “wasn’t a lot of enthusiasm” in the room when the news was announced moments earlier.

“I was telling (Melvin), ‘You’ve got to understand, these folks were put in shock when this whole facility closed…And so somebody shows up to town to say we’ve got good news, and you’re like, ‘I’m not so sure about that. I’m not sure I’m buying that until I see it,'” Kasich said. “…This ought to be a day where we get a little spring in our step.”

Kempton called Rural King “the perfect addition to our region.”

“They’re a well-established company, they’re growing and they obviously have the need for a distribution center in Ohio to push out to their other stores,” Kempton said. “In Pike County and Waverly, we not only have the skilled personnel that Rural King will need, we definitely have the need for the jobs they are going to bring…They will have a huge impact on our economy.”

Rural King will be the largest employer to locate in the Pike Industrial Park since Masco’s departure in 2011. Other tenants include Geo-Tech Polymers and Ohio International Lumber.