Two Athens County development leaders were in Washington D.C. this past week for the announcement of a $10 billion initiative to promote rural economic development. 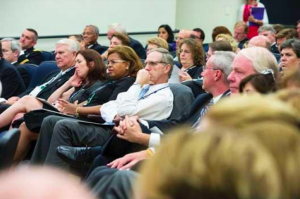 The U.S. Rural Infrastructure Opportunity Fund is designed to grow local economies by increasing access to capital for infrastructure projects and speeding up the process of infrastructure improvements.

The next day they participated in the first-ever White House Rural Opportunity Investment Conference. The conference brought together business and financial community leaders, federal government officials, rural development experts, and others to promote investment opportunities in America’s rural areas.

Molinaro and Decker both applauded creation of the Infrastructure Opportunity Fund. The Fund starts with $10 billion but officials are hoping for more investment from private entities.

Molinaro said there is a “critical” need for industrial site improvements in the 28 counties where he works. The Appalachian Partnership for Economic Growth is headquartered in Nelsonville.

“I’m excited by the possibilities the event opened up,” proclaimed Decker, whose agency, based in The Plains, serves Athens and other counties in the region. She praised U.S. Department of Agriculture Secretary Tom Vilsack, who announced the fund.

She said that Vilsack did a good job of promoting opportunities in rural locations, adding that Appalachia Ohio and other such areas “are critical to America’s future.”

USDA has been a “huge partner” on projects, according to Decker, and the new fund could help with “a backlog of infrastructure needs.” Projects that will be targeted will be hospitals, schools and other educational facilities, rural water and wastewater systems, energy projects, broadband expansion, and local and regional food systems.

“With new efforts like this we can move beyond existing programs and help encourage substantial private investment in projects that grow the economy and improve quality of life for millions of Americans,” said Secretary Vilsack, whose agency will play a lead role in identifying projects for financing.

The new fund and the Rural Opportunity Investment Conference are part of the Obama Administration’s efforts to spark investment in rural communities through private sector sources or through public private partnerships. And this was of particular interest to Molinaro.

He pointed out that investors in urban centers often aren’t aware of investment opportunities in rural communities and Molinaro hopes the White House Rural Council can help with that. He said by channeling investment capital into rural places, companies can grow and create jobs.

Molinaro said Southeast Ohio has a problem with a lack of working capital for companies trying to expand, and he cited the case of one that’s in “a credit bind.” He learned about “a new option” while in Washington and plans to discuss that with the company when he gets back home.

The Rural Infrastructure Opportunity Fund has CoBank as its “anchor investor.” Capitol Peak Asset Management will manage the new fund and work to recruit more investors.

The fund will allow a wide variety of new participants, including pension funds, endowments, and foundations. These investors have not traditionally had access to rural development markets. In some cases, projects may be funded entirely through private sector dollars, while in others private dollars may be leveraged with government loan and grant programs.

According to a report in the Wall Street Journal, the fund could broaden investment in rural America, but it also could translate into communities paying higher interest rates to fund needed projects rather than waiting in line for potentially lower interest rates through USDA loans.

Photo Credits: Photo from the USDA.
Photo Caption: Rural Action CEO Michelle Decker, with hand to face on left side of photo, attended a meeting at the White House to learn about infrastructure funding opportunities for rural America.