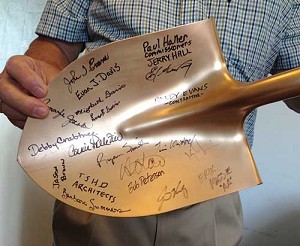 As the groundbreaking ceremony drew to a close, the Jackson County Commissioners crowded into the old, cramped James A. Rhodes Airport Terminal to conduct some important business. One commissioner stood; another settled for a seat away from the table rather than try to squeeze by members of the media, who were there to cover the important moment. A few local dignitaries were able to fit inside the terminal to watch as well, but only a few, due to a lack of space. 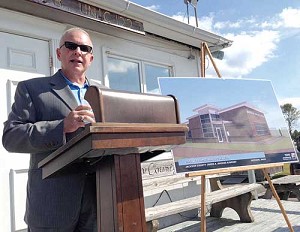 The need for something new was never more evident. As the commissioners signed their names to a contract and issued the official notice to proceed with construction, it became apparent something new, bigger, and better is at long last on the way.A ceremonial groundbreaking was held Wednesday, September 17, to celebrate the construction of a brand new airport terminal for Jackson County. The event was attended by local leaders, elected officials, and some of the many individuals who had a hand in helping the project come to fruition.“As you can tell, we need a little bit newer stuff around here,” said Jackson County Commissioner Paul Haller, as he spoke from the shadow of the current 50-plus year old terminal.“This has been a team effort from the start, so many people came together to get this accomplished. We’ve put a lot of hours and meetings into this.”An award of $579,733 from the Federal Aviation Administration (FAA), along with a $150,000 grant from the Southern Ohio Diversification Initiative (SODI) are helping fund the much-needed improvements to the James A. Rhodes Airport.Other partners in the project include the Jackson County Commissioners, Airport Authority Board, Jackson County Economic Development, TSHD Architects, Stantec, and contractor Randy Evans.

Photos courtesy of The Telegram News