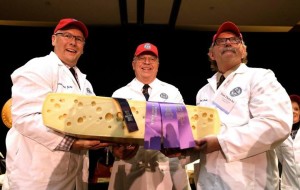 Team Guggisberg Sugarcreek, of Guggisberg Cheese, Millersburg, Ohio, took top honors out of 1,892 entries from 28 states for their Swiss wheel. Out of a possible 100 points, the Swiss wheel scored 98.496 in the final round of judging, during which judges re-evaluated the top 16 cheeses at an evening charity gala to determine the overall champion.

First runner-up in the contest, with a score of 98.389, is a brick cheese made by John (Randy) Pitman of Mill Creek Cheese in Arena, Wisconsin. Second runner-up is a medium cheddar, made by the Kiel Production Team, in Land O Lakes, Kiel, Wisconsin which scored 98.337.

“Every medalist should be extremely proud of being recognized as the best of the best in the largest national dairy competition ever held,” said John Umhoefer, executive director of the Wisconsin Cheese Makers Association, which hosts the biennial competition.

Wisconsin took home the most gold medals, with 56 of the total 90 categories judged. New York came in second among the states, with 7 golds. California had 6 gold medals, Vermont had 5, Idaho had 4, and Oregon had 3. Wisconsin, New York and California captured the most medals in the debut yogurt classes, each winning 2 medals.

The United States Championship Cheese Contest is the largest technical evaluation of cheese, butter and yogurt in the country and is rooted in more than 120 years of history, beginning when the Wisconsin Cheese Makers Association held its first cheese contest in 1891. In recent years, the event has flourished, more than doubling in size since 2001. This year, more than 33,000 pounds of dairy products were entered into the contest.

For more information on the contest, as well as complete results for all 90 entry classes and contest photos, visit http://www.uschampioncheese.org.